Spirulina For Dogs: 5 Reasons Why This Super Green Algae Benefits Dogs Of All Ages

Spirulina is a green-blue algae that packs a massive nutritional profile to help your dog in many ways. Keep reading to learn why spirulina is essential for your dog's wellbeing. 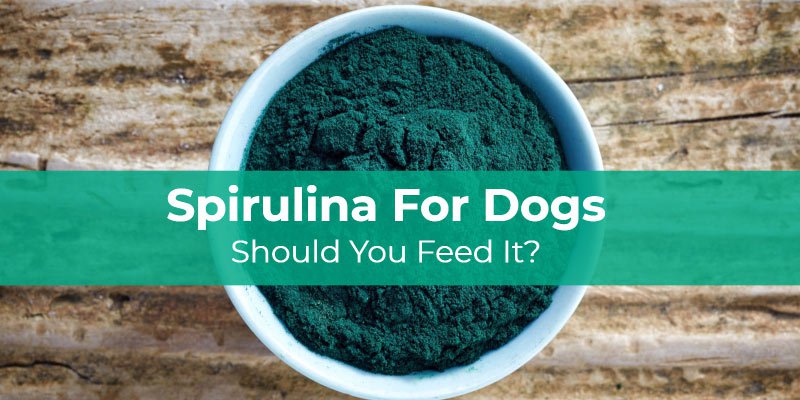 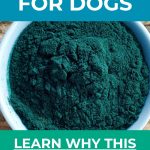 Spirulina for dogs: never heard of it? Not surprisingly, many people haven’t, even though this superfood is considered one of the most potent superfoods you can get.

As we recognize the benefits of natural and holistic remedies for humans, many modern-day pet owners are also beginning to understand the positive effects of these naturally-sourced nutrients for their furry companions. And as we also see the long-term adverse effects of highly-processed food and pharmaceuticals, it is more imperative than ever to proactively incorporate organic ingredients into your pet’s overall diet.

So what is Spirulina?

This nutrient-dense blue-green algae is a bacteria found in numerous parts of the world and is considered one of the oldest life forms on our planet. It contains a high amount of calcium, zinc, iron, and perhaps most importantly, protein. In fact, Spirulina is comprised of more than 60% protein!

Due to its therapeutic properties, Spirulina has been used for centuries by ancient civilizations such as the Aztecs, as well as in various cultures throughout Africa and Asia (1). In recent years, Spirulina has become increasingly popular in the natural and holistic food industries as people rediscover the many benefits hidden in this humble organism.

But what about Spirulina for dogs? Can our pets benefit from its nutrients as much as we humans do?

But let’s first delve into how a dog’s physiology works and how your dog can take advantage of this superfood.

Depending on who you ask, dogs can be considered either omnivores or adaptive carnivores. Regardless, it can be agreed that a dog’s gastrointestinal system does allow them to intake (and benefit from) a certain amount of plants. In the wild, canines such as wolves naturally scavenge for plants (such as berries) to supplement their diet.

Additionally, these predators may also consume vegetation via the gut of their prey. Similarly, domesticated dogs have taken scraps (both meat and plant-based) from humans for thousands of years.

As their physiology developed over the decades, dogs have become better able to not only ingest but also benefit from both plants and vegetables. Some examples of this are the presence of small amounts of the digestive enzyme amylase in their gut (which allows them to convert plant-based starches into sugars), as well as a slightly longer digestive tract than a pure carnivore (such as a cat) (2).

As such, this allows them the adaptability to absorb nutrients from sources we humans enjoy, such as fruits and green vegetables. This is why many pet owners are turning to Spirulina for dogs as a supplemental source of vitamins, minerals, and protein.

The Health Benefits of Spirulina for Dogs

Spirulina is truly a superfood, filled with a wide variety of nutrients that can be absorbed by humans and dogs alike. But what function do these nutrients actually perform? Let’s delve into exactly how the compounds found within Spirulina benefit your dog.

The immune system is everything. There’s no doubt that a dog with a weak immune system is susceptible to a variety of health problems, such as diabetes, allergies, arthritis, and even cancer. Providing your pup with the support it needs can help to reduce the risk of these conditions occurring.

Spirulina is an amazing source of antioxidants, giving it strong anti-inflammatory properties to help boost that immune system. Specifically, it contains a compound called phycocyanine that helps to prevent and mitigate cell damage and protect vital organs, thereby providing direct support to your dog’s health (3).

Considering the immunity-boosting properties of Spirulina for dogs, it stands to reason that it would also help prevent or reduce allergies. At its most basic, an allergic reaction is an over-response of the immune system to a foreign body (i.e. food, dust or pollen). And since Spirulina helps to strengthen and support the immune system, it also helps its reaction to elements that would normally trigger it in a weakened state. And this works for not only airborne allergies, but also food allergies. It’s a win-win all around!

So, why else would you choose Spirulina for dogs? Well, in relation to its support to vital organs, it provides fantastic benefits for both the liver and kidneys. Similar to humans, our dog’s bodies are constantly exposed to a variety of toxins and harmful chemicals from sources such as processed foods and pollution. Both the kidney and liver play a significant role in ensuring that these dangerous elements are purged from our system.

The therapeutic properties of Spirulina help to assist this process. By offering a concentrated amount of toxin-flushing phytonutrients (such as chlorophyll and alpha-lipoic acid), it aids the body in natural detoxification (4).

There are also some wonderful gastrointestinal benefits of Spirulina for dogs. First, it contains a wealth of digestive enzymes to help maximize the absorption of amino acids (of which all protein is comprised). It also encourages the growth of good bacteria (such as lactobacilli) in your dog’s gut, while also suppressing bad bacteria (5). This is a particularly beneficial aspect of Spirulina for dogs, especially for breeds predisposed to digestive conditions, such as Irritable Bowel Disease.

Spirulina for Dogs with Cancer

A word of caution here – always refer to your veterinarian before administering any holistic treatment for canine cancer. I can’t make any promises that this will prevent or cure cancer. But I can provide some research that I’ve found.

As a nutrient-dense food, Spirulina contains many free radical-fighting vitamins, such as iron, zinc, and chromium. Additionally, compounds such as phycocyanine act as strong antioxidants and can provide a barrier against cell damage and cancer, while also strengthening the immune system to fight off potential threats to the body. According to this study “The results showed that aqueous extract of Spirulina has a protective effect against apoptotic cell death due to free radicals.” (6). The chlorophyll present in Spirulina also aids in reducing the risk of cell degeneration and death. Overall, the antioxidant aspect of this blue-green algae is very promising.

How To Feed Spirulina To Your Dog

Now that you know about the many benefits of Spirulina for dogs, you may be wondering how to incorporate it into your pup’s diet. Read on to see how to find the best sources for this supplement and some of the best ways to add it to your dog’s food.

How To Choose Spirulina For Dogs

When it comes to spirulina supplements, ingredients and sourcing are extremely important. There are many stores and online companies that can offer Spirulina for dogs. However, make sure you check the label first to see where it was produced or harvested. Questionable companies or locations could mean that the product could contain harmful contaminants. Try to look for a company that boasts reliable and responsible sourcing.

Additionally, Spirulina should come in as pure a form as possible and any added ingredients (such as additives and preservatives) can significantly compromise its quality. Many manufacturers do this so they can lower the price of their products, but a diluted form of Spirulina only results in far fewer benefits to your dog’s health. And while It may be cheaper to go this route, remember, you get what you pay for.

Adding Spirulina To Your Dog’s Diet

Spirulina can come in a capsule or as a powder. It’s really up to you as a pet owner which form you feel your dog will most likely to take their supplement. However, because of its nutrient-dense nature, it may be best to try the powder form first so you can introduce it slowly to your their system, especially since Spirulina can cause stomach upset if your pup isn’t accustomed to it.

When it comes to your typical daily serving, a good rule of thumb is ¼ teaspoon for each pound of food. But if you want to start slow, you can cut this amount in half and give it to your dog for a week or two to allow them time to adjust to it.

Fortunately, Spirulina doesn’t have an overly strong taste or smell, so your dog should have no problem eating it. As such, the powder can be sprinkled directly on dry food or mixed in with wet or raw food. Some owners have found that mixing it with water or a broth and then adding it to their dog’s food also works well.

You can also make frozen treats with Spirulina powder. Some common recipes include coconut oil, yogurt or pumpkin mixed with the powder and then frozen to make a yummy health-boosting snack! Want a quick recipe to try out? Here’s a popular choice:

Instructions
Mix yogurt, Spirulina, and cinnamon in a bowl. Fill ice cube tray with the mixture. Add one blueberry to each cube. Freeze overnight. Serve to your pup!

As a pet owner, we know you want the best for your pup. So, we hope you enjoyed our article on Spirulina for dogs and why this superfood may be one of the best things you can add to their diet. Give your pet a true health boost with this superfood and try it out! We’d love to hear your pet’s experience with it. Have any questions or comments? Comment below! And don’t forget to share our article to let other pet owners!

Please log in again. The login page will open in a new tab. After logging in you can close it and return to this page.